Recently, the committee publishing the works of Rav Shagar z”l published a collection of Rav Shagar’s writings on post-modernity in a volume called Luhot veShivrei Luhot (2013). The essays were given as talks during the last five years of Shagar’s life and appeared in various out of the way conference proceedings or Religious Zionist journals. I am still processing the other essays which directly relate to theology however, there was a free-standing essay given at Maaleh Film School in 2007 which deals with those who are leaving observance and becoming DATLASH, a Hebrew acronym whose initials stand for dati le’she’avar (formerly religious).

Rav Shagar blames the parents and the establishment as opposed to those younger members who become Datlash and disassociate with Religious Zionism as he believes the latter has no choice in separating. Referring exclusively to Israel, he sees the generation of 1950s grandparents as having a tepid religion as part of their Mizrachi Relgious Zionsim. The children in the 1970s rebelled by creating the dedicated religious world of the Hesder Yeshiva, where everything was from derived directly the Book which thereby negated the living familial and communal religion. The grandchildren, having grown up with the sterile world of Judaism by the Book, were left with two choices: either increase the ritual obsession through becoming Hardal or give up the sterile religion by becoming DATLASH. Surprisingly, Rav Shagar thinks that Hardal is a relinquishment of the Relgious Zionist project of openness and fulfillment in the real world, while Datlash is a return to a basic sense of religion. 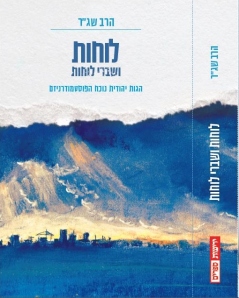 Rav Shagar opens and closes the essay acknowledging that while a child who chooses a datlash life brings immense pain to the parents, the older generation is to blame. The essay encompasses numerous cultural references to movies, TV, books that I am leaving out for my readers who have not seen the Maaleh films of the late 1990s. But it is nonetheless noteworthy that the Hardal world considers the world of movies and popular culture as forbidden, yet he used them for his teaching.(for more see, my review of Rabbi Stav.)

Rav Shagar cites a study by Mordechai Barlev (1998) on the graduates of religious Zionist high schools and their leaving religion. Unlike the rejection of religion to become a secular Israeli (hiloni) of prior generation, here the problem is the influence of the modern world on religious youth.

BarLev notes a phenomenon of “inner secularization” on some of the youth even though they stayed in the religious Zionist world. They didn’t change their manner of dress or take off kippah, rather they live lives that are secular in existence and secular in cultural. Even if the high school graduate does not watch TV on Shabbat and even if he goes to shul, the spirit and focus of his Shabbat is still a Shabbat of newspapers and secular books like his secular neighbor. If we compare these religious Zionist youth to a mesorati home that is traditional but not-religious in which they light candles and makes Kiddush, one finds there is little difference in their life. These graduates are now called dati-lite

Rav Shagar discusses two recent films. In the first movie, a widow has three daughters, one datlash, one Hardal, and one dati-lite. Shagar blames the old-time Mizrachi world for not giving enough emphasis to Torah or religion. (AB- the recently deceased reform Rabbi Herbert Wiener made a similar point in 1964 when he visited the land of Israel expecting to find a religious revival and instead found little interest in religion.)

The Second movie is focuses on a rabbinical father, a member of the Gush Emunim settlement movement who was also part of the religious revival that came in the 1980s. The father is portrayed as dogmatic and rigid, therefore his son rebels. The symbolism of the movie is setting a dog free on Yom haAtzmaut to show the need for greater freedom and naturalism in Religious Zionism.

Rav Shagar asks: What is nature of becoming secular (hilon) today? Our secular concepts of today are not those of once upon a time; the politics of today are not the Marxist politics of yesteryear. The new generation is something new, they are datlash. Today, unlike in the 1950s, one is not simply becoming secular from a loss of faith, an inability to believe in God, or even in the face of enticements or opportunities in secular world. It is just that religious Zionism is not relevant anymore in the lives of formerly Zionist youth; what we can see from the rise in datish is that religion slowly and reticently falls away. It is a social problem in which religion fell away from real experience.
The Hesder Religious Zionist World is a community of arbitrating and evaluation every action because lives are to be conducted and lived by the book. Even lived faith and religiosity has loss all spontaneity in one’s quest to do what the book says.

Today, according to Rabbi Shagar, we have lost all connection between the living voice of the prophets and the proclaimed political messianic age. The vision of Rav Kook once sustained the yishuv; now religion is an ideology. Some flee from it and others embrace the extra stringencies and obsession with modesty. Datlash and hardal are two sides of the same problem. The Hardal will end religious Zionism and the datlah only see part of the problem.

How are the hardalnikim different than the classical becoming haredi? In the Torani community of Hardal, there is an avoidance of learning the secular attributes and the former become artificially rigid and dogmatic to fight the secular. Since fighting the secular does not come to them naturally because of their open upbringing they create new rigid position on practices like modesty. For Rav Shagar, this creates a contradiction between the openness at the core of the religious Zionist project and Hardal isolation, sectarianism, and dogmatism

Rav Kook spoke of a revolution, a Torat Eretz Yisrael, based on hagshamah (working the land), and today, we need to seek new values beyond the Shtible. Now religious Zionism became dogmatic, frozen, and uprooted from life. The artificial strictness causes its younger members to flee.

The secular and religious are in continuity since most datlash are still connected to their religious home and upbringing. They form their own enclaves. Religion (Dat) is part of the name and very essence of datlash. The ex-religious group remains religious in social group yet give up belief and practice; however, members do not become completely secular like the 1950s.- Therefore there is continuity between religion and secular. The continuity is also found among the dati-lite who keep the social norms of kippah and synagogue even if they don’t pray or daven daily or say blessings. The difference of the two groups Datlash and Dati-lite is watching a movie on Friday night TV or the occasional travel on Shabbat.

However, the real definition and distinction is self-identification. Rav Moshe Tzvi Neriah said about the earlier secularization, “I worry more when a boy takes off his kippah than when he stops putting on tefillin.” It is all a self-identification. The psychological differences are great even if tefillin is from the Torah and kippah is only a custom. The former is a loss of identification while the latter is only laziness.

The datlash has no sense of victory or a new era or triumph; they know the grass is not completely greener on the secular side. There is a loss of religious identity more than a loss of halakhic observance (compared to the Dati-lite). This loss of identity is not just existential but also shown in body and society. There is a willingness to take off clothes in street, such as removal of a polo shirt which never done by a religious Zionist guy even if not technically forbidden. A datlash is not a removal of mizvot as much as a removal of restrictions. It is also the loss of connection to religious Zionist community. There is a removal of God and holiness from their frame of reference. For the sake of heaven (leshem shamayim) and sanctifying the physical as taught in religious Zionism is now seen as obsessive, rather than uplifting. Hardal is as oppressive as the Haredi society, and both think mizvot are the entire purpose of life.

Rav Shagar says that light and dark are mixed in the lives of the datlash. Their throwing off the yoke gets them more in touch with life. They are now paradoxically secular but with a connection to religion. They are creating secular study halls or traveling on Shabbat to study midrash and hasidut. As it says: “It is better that they leave me but keep my Torah.” They are Datlash because they found the prior generation lacking and regain connection and identification with Torah, paradoxically by leaving. They need to leave to find holiness and cleaving to God.

Datlashim are still in the margins of the religious Zionist community. They want a more fluid and softer religion – they want traditionalism – they want the soul of mizvot without the imposed unnatural rigor imposed by the yeshivot. n Yeshiva, we were taught to mock and disregard traditionalism and to reject our parents and their actions. For Yeshiva, baal batish- if it was not based on text was to be avoided. For Rav Shagar, the traditionalism was in many ways much better than the Hardal approach. Traditionalism has the soul of a lived religion, a lived chain of tradition. For Rav Shagar, “even though I think we need to keep every detail in the Shulkhan Arukh- it is the traditionalism that is the soul of the Shulkhan Arukh.”
Datlash is in some ways more advanced or a more vanguard approach tothe religious Zionists community, one that lost its roots. The observance of the Datlash after they separate from Relgious Zionism is in some ways more connected to Torah and mizvot. Rav Shagar sees hope in them and their children for the true holy rebellion.

There is much in this Israeli perspective that is different from the United States- on post-Orthodoxy-see here. Also in Israel, I must point out that there is an unpublished Hebrew PhD by Ari Engelberg that shows that indeed datlash is empirically a new group between religious and secular. His research shows that the historicity of the Torah does not play a big role for them. The Datlash have a new age holistic sense of religion, not in continuity with their former particularistic providential God of Yehudah Halevi and Rav Kook. Rav Shagar elsewhere in this book shares sympathy with a more universal holistic sense of God that he calls post-modern, but we will discuss that in a future post (or for those who live in Bergen county there will be a hug bayit on the sefer at my place Shabbat 5:45 for the next 5 shabbatot, excluding YK-contact offline).