There is a new interfaith organization out there called “Orthodox Rabbis for Interfaith” with a surprising story, the group is made up entirely of young leadership affiliated with Shas. It seems that for the last three years the United Nations has given money from the Ford Foundation to a group of forty young leaders and rabbis- average age 35- associated with Rabbi Ovadiah Yosef for the purpose of educating them into the basics of Islam, the Middle East peace process, and the Palestinian perspective. They have received lectures, tours, and seminars from academics, Arabs, and the military to broaden their perspectives.

Now that their training has ended, they are fulfilling their promise and bringing what they learned out to the broader Shas community and they are engaging in active interfaith dialogue. They have even started a new organization to get the word of the need for interfaith out to the public. According to the articles they visited the Sheikh Abu Khader Jabari, the Palestinian clan leader of Hebron and discussed topics with the Imams. When asked “How can Jews thank God every morning for not making them a gentile goy?” They answered: “it only applies to the ancient pagan gentiles who worshiped the stars,not to Muslims.” They further relied with a pun “Maariv Aravim ba Hokhmah,” therefore God approves of Islam.
They seem to have a solid Romantic view of the peaceful co-existence of Jews and Muslims through the ages, which they will once again foster as Arab Jews who speak Arabic and share the same values and culture. 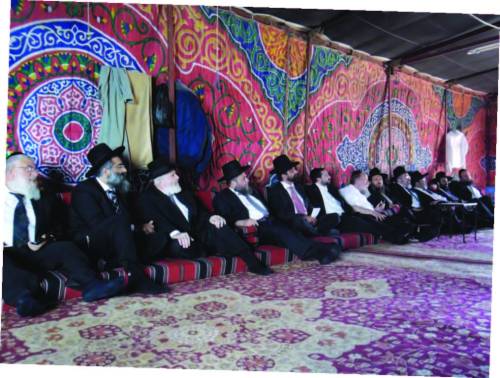 They were featured in the recent feature in the holiday magazine of Kav Itonut (parent of religious paper HaShavua) describing their history and activities.- Kav Laitonot.pdf Here is a description of their activities from a Shas publication-Shasnet from 2009 describing the training- here.

Here is a nice documentary on the program and their training.

They recently visited the Trappist monastery in Latrun desecrated with graffiti. And a representative was interviewed on the Israeli talk show “Kirschbaum and London,” where the secular hosts were particularly condescending to religion and toward the Arabs. The secular hosts even called the monastery the “therapeutic” instead of Trappist.

The same organization Interpeace is funding a Master’s degree in conflict resolution for ultra-orthodox women to serve as community organizers. About 40 prominent ultra-orthodox women are now participating in a similar educational programme. Many of the women are leaders within their communities, for example the wife of the chief Sephardic Rabbi of Israel, the daughter of the chief Ashkenazi Rabbi of Israel and the wives of two SHAS ministers etc. The Master’s programme is jointly implemented by Interpeace, the Haredi College of Jerusalem and Ben-Gurion University. Apart from organizing inter-religious encounters, the two year programme teaches English, mediation skills and about the ongoing Palestinian-Israeli conflict.