Greetings from Varanasi, India. An ancient town with continuous residence of the same people since the 6th century BCE and possibly continuous since the 13th century BCE. The town is also known as Kashi (its ancient name) and Benares (its Hindu name). This is the city that that you see in the pictures where thousands come out to bath in the Ganges and everyone waiting in line on the ghats (the staircases down to the river). 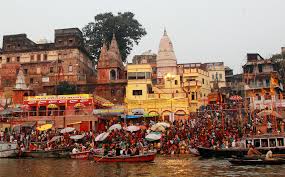 I am here as a Fulbright Senior Scholar for a while.

I am staying at the Benares Hindu University, the oldest and largest in Asia, a university founded in the colonial period by the Annie Besant. The campus is twice the size of Central Park and arranged as buildings set back among hibiscus and jasmine flowers. Picture the original vision of Givat Ram of the separate buildings behind the library. Now multiple it several fold. Most of the campus is for technology, agriculture, and medicine so the size of the Arts and Sciences section that I have to deal with is not that bad. 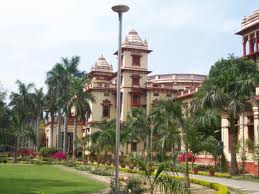 Below is the library.

Now that I am settled, the blog will resume with its regular posts. I am nine and a half hours ahead of DST and will be ten and a half hours ahead of EST. Power in this part of the country is spotty. I arrived during the cyclone when everything was worse. All forms of internet and wifi are also spotty. Even in an internet café the power or wifi can go at any time; the locals take it in stride. I will only be checking email and monitoring comments once a day around 5-AM EST, if there is wifi. I may get there as early as 2 AM EST but don’t count on it. The University has blocked Facebook.

My project here in India is three-fold. First, to go back and add some clarity to the Jewish Hindu encounters of 2007, 2008, and 2009. Let’s see how much they understood of each other and how much the Hindu side, the Hindu Dhrarma Acharya Sabha led by Swami Dayananda Saraswati, was representative of broader opinions. Here is a full set of documents from the encounters. (The online were from the right wing Hidutva parties.)

Second, to explain what is Judaism. There is almost no knowledge of the Judaism here and not even basic Jewish books. In a future post, I will show how bad it is. They basically only know Jews from the New Testament, Shakespeare, Marx, and the Holocaust. In their reading of Abraham and Isaac, Judaism grew out of a human sacrifice cult. Or if you asked them to explain Judaism they will start with Judaism of pillars in high places, soothsaying, golden calves and battles against Baal, we just evolved from there. Conversations usually start, with my being asked if the Jews are like the Pareses and then concluding with a question if we are part of Christianity.

Third, to explain back home the complexity of Hinduism(s). We are equally unaware of them. Unless you have a recent degree in the field, much of the Hinduism in the introductory American textbooks is based on the colonial era presentations, eclectic mixtures of ancient citations, 10th century texts, obscure cults, and ethnography of the populous. All of them having little to do with the current religion of your radiologist or IT specialist who is outsourcing your job, so please avoid the stereotypes or fragments of knowledge. I will be visiting Tirupati in the South where the shaitel hair comes from and other places around the country. If you have any specific research questions then email privately,

This town is not on the “Hummas-trail” of visiting Israelis since it is dedicated to education and ritual not to fun and freedom. I may post on the hummas trail in the future.

Varanasi is not the modernizing high tech part of India. It can take a half hour to go one km due to the sheer mass of people, with their bicycles and packages moving among the rickshaws, cows, dogs, 10 year olds on motorbikes, potholes, pushcarts, paupers, and holy men. Mark Twain say it all: “Benaras is older than history, older than tradition, older even than legend and looks twice as old as all of them put together”.

I am not the only one around this year or doing this activity. I cannot attend it but there will be a conference of scholars from Brandeis and Tel Aviv University explaining contemporary Judaism next month in Delhi , they have been doing this for several years already.

From 2007-2009
Below are some earlier thoughts from 2009
In 2000, the World Council of Religious Leaders was formed at the Millennium World Peace Summit. The objective of this new Council was the offering of the collective wisdom of the faith traditions toward the resolution of global problems. The Council’s secretary general Bawa Jain has been very active fostering the Hindu-Jewish dialogue.

In 2007, the first Jewish Hindu Summit took place in Delhi, India where both sides affirmed that their “respective Traditions teach that there is One Supreme Being who is the Ultimate Reality, who has created this world in its blessed diversity and who has communicated Divine ways of action for humanity, for different peoples in different times and places.”

A second Hindu-Jewish Leadership Summit took place in Jerusalem, February, 2008. In this meeting they went further in their declarations and deemed Hinduism and Judaism as a shared “Creator and Guide of the Cosmos.” The Jewish delegation also accepted that true Hindus accept One Supreme Being and do not think that the representations are idols.” Hindus do not worship ‘gods’ and idols.’ The Hindu relates to only the One Supreme Being when he/she prays to a particular manifestation.”

In 2009, The Hindu representatives all shared a common perception of Christians as engaged in aggressive mission and that Christians have a hidden conversionary agenda in interfaith activity with Hindus. Even now in the US, the Hindus complain that they face aggressive missionary campaigns. They felt that with Jews they can share non-proselyting discussions. In addition, the Hindu representatives pointed to the lost of life by over 5 million Hindus in persecution by Muslim invaders because they chose not to convert. And now face an Islamist Islamic force both within and without India. Analogies to Jews and Israel were tacitly a given. In 2000 years there has been no indigenous anti-Semitism in India, which received unanimous applause at the meeting.

As part of the new multifaith America, the Hindus representatives emphasized that they can learn from Jews about community building as a Diaspora minority in America. More importantly, they wanted to fight anti-Hinduism and change the derogatory descriptions of Hinduism in textbooks.
The two substantive interfaith themes, reiterated from the first two summits, was the Hindu understanding of God and the swastika. The Swamis reiterated that they worship a single supreme being and that they are not polytheistic. And that they earnestly wanted Jews to know that the Swastika is an ancient Hindu symbol of auspicious times, which originally had nothing to do with Nazis.
Some of the Hindu leaders were too religious to be in the same room as women, while others gladly shared the podium with female Hindu leaders. Some would only have the fresh fruit, since they would not eat anything cooked in our utensils.

Why now?
In the post 9/11 world India and Israel have had a rapid rapprochement, pushing aside the prior 50 years of tensions. And as stated above, this is intertwined with the recent political and military links between Israeli and Indian, consisting of arms sales, joint intelligence, and work toward trade agreements. It is curious to ponder that Swamis who do not eat any sentient being are creating a safe backdrop for arms sales.
For the Swamis and rabbis involved there is great excitement to engage in encountering another religion with which one does not have any negative historical baggage.
It is connected to the over 40, 000 Israeli youth who visit India each year. As these youth mature, they are conceptualizing their Jewish religion with their perceptions of Hinduism. In the US, it allows the Jewish community to have a sister Diaspora religion.